April 26, 2017
Trump bans Laptops from  Aircrafts on Flights from the  UK and Asia 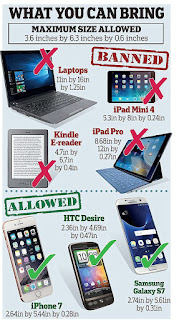 US  Passengers flying to the US from British Airports face being banned from taking laptops and iPads in their hand luggage.
President Trump’s administration is considering extending its ban on large electronic devices being carried in Aircraft cabins to flights from Europe, The Times reported.
Last month both the US and British governments barred passengers from bringing large electronic devices on board incoming flights from six Middle Eastern countries.

The ban, which followed concerns terrorists had perfected a new type of airline bomb, means travellers have to stow gadgets larger than a mobile phone – including laptops, tablets and kindles - in the hold.
British security chiefs have now been warned that the US is planning to extend these security restrictions to incoming flights from some parts of Europe and have been put on alert that Britain could be one of those affected.

The newspaper reported that the move could be implemented within weeks but that no final decision had yet been taken as to whether Britain would be included in the ban.
One Whitehall source is reported as saying: ‘As with everything from Trump’s America, there are conflicting reports about where, when and what.’

A US official confirmed to The Times that Britain was on the list of countries being examined for extended security restrictions.
A UK government spokesman said: ‘The safety and security of the travelling public is our highest priority. We keep aviation security under constant review.’
The US Department of Homeland Security said: ‘We will continue to evaluate the threat environment and make determinations based on that assessment but we have not made any decisions on expanding the current restrictions against large electronic devices in Aircraft cabins from selected Airports.’

European Aviation CSeries Approved For London City European Aviation   Transport Canada approved Bombardier CS100 Airliner London City Centre Airport Transport Canada and the European Aviation Safety Agency have approved Bombardier CS100 Airliner for service to London City Centre Airport.   And that means Bombardier can sell the Aircraft to Airlines that want to provide non-stop service from the convenient downtown London Airport to eastern U.S. cities. Most of the Aircraft that use the downtown Airport are regional Flights with limited range.  The CSeries offers a realistic transatlantic option from the Airport.  Central to the approval was certifying the CSeries for steep approaches of six degrees. Swiss International Airlines will start service to the Airport later this year. Although London was the prize in the certification, it will also clear the plane for use at Airports in Lhasa Tibet and Haifa, Israel. Also mentioned  was Billy Bishop Airport

Airline Troubles Create Opportunity for Bizav in Nigeria Airline Troubles Create Opportunity Bizav in Nigeria business Aviation community Africa Dollar-weak Currency squeeze Arik Air suspended Flights London and Johannesburg The problems in Nigeria’s commercial Airline sector appear to be creating opportunities for the business Aviation community. While carriers across Africa are suffering from a strong dollar-weak local currency squeeze, nowhere is this being felt more than in Nigeria. Its biggest commercial Airline, Arik Air, suspended Flights to London and Johannesburg in February and is set for further downsizing of its operations. After a contraction in activity two years ago due to Nigeria’s economic downturn, business Aviation has been quick to seize its chance, albeit one that took some time to present itself. Achuzie Ezenagu, CEO of Nigeria’s Toucan Aviation, told AIN, “The initial knee-jerk reaction was for top clients to seek ways out of con

Kiri Marsh, 32, in court accused of spitting at  Air New Zealand  crew member on flight Stuff.co.nz Police were called to meet flight  Air New Zealand  flight 559 as it landed in Christchurch about 6.30pm. They and aviation security arrested Marsh. Flag as irrelevant Safe  Air  to be known as Airbus  New Zealand Australian Aviation From July, aviation maintenance, repair and overhaul (MRO), design and manufacturing company Safe  Air  will be renamed Airbus  New Zealand  ... Flag as irrelevant Little Mix's performance too filthy to  air  on BBC Radio New Zealand Herald They're also due to perform in  New Zealand  in July. Leigh-Anne Pinnock, Jade Thirwall, Jesy Nelson and Perrie Edwards of Little Mix perform at BBC ... Flag as irrelevant Air NZ  awarded $1.4m over check-in charges NZCity Air NZ  has been awarded over $1.4 million from a hotel chain because they were incorrectly charged for early check-ins and late check-outs in